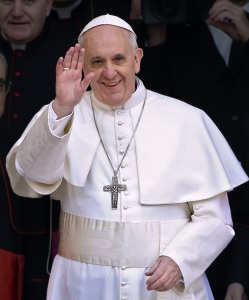 A controversial new Catholic Monastery, known as “The Convent For Racist Penitents”, located in San Francisco, California, has received a special papal blessing from Pope Francis. The monastery’s Abbots, Brothers Leo Berkowitz and Mark Smith, espouse a Catholic Liberation theology. Some racist and reactionary critics on the extreme right claim that this theology represents a blending of Catholicism with what they call “Cultural-Marxism.” These ignorant, hateful, and ill-informed critics, claim that “radical” Marxism and an awareness and condemnation of white-male-privilege is somehow incompatible with the traditional teachings of Christianity!

Brother Smith explained that his monastery offers many exciting innovations, as well as a resurrection of more traditional monastic practices. The monastery welcomes and encourages Catholic visitors, as well as those from all of the world’s great faith traditions as well as those of no religious faith. Those who stay at the monastery are asked to adopt its ritual practices, which involve powerful tools and techniques to help penitent white racists overcome the racism that they were born with.

“We take it as an axiom that all white people everywhere are born racist,” Brother Berkowitz noted, adding that “Scientific studies show that babies recognize race, and have a preference for their own race. Even white infants are not innocent of racism. White infants are just tiny little racists, or mini-sized hate-mongers! Then they grow and imbibe racist hate through their mother’s white milk! Most white parents teach racist hate to children from the cradle!” Brother Smith chimed in, and noted that “I myself was taught at a young age to be careful in black neighborhoods by my parents! That kind of ignorant hate poisons a child’s soul! I am ashamed to admit that I didn’t slap my parents in the face when they told me that.”

Brother Smith and Brother Berkowitz offer a spiritual take on racism. “We believe that racism is the ultimate sin and expression of evil. When Moses married a black Ethiopian woman, his sister Miriam spoke against it as did his own brother. God struck her with leprosy as punishment, in His righteous rage! (Numbers 12:1-9) God hates racism and will mete out His divine wrath and judgement upon all racists! They cannot escape His wrath, and His anger against them cannot be appeased! They will be judged and they will pay for their racist hate!”

The two Brothers claim that “Unrepentant racists will burn in everlasting fire, where there is weeping and gnashing of teeth! Read Matthew 13:42! The racists will cry out for mercy, but God will deafen His ears to their cries! See John 9:31 and Job 35:13! God will not grant them even a single drop of water in hell, to cool their evil hate-vomiting racist lily white tongues! The cries of the racists will ascend to Heaven, and they will gladden the hearts of the righteous, who will rejoice hearing them! They will cry out to God for mercy, and we will laugh, knowing they will receive none!”

Somewhat controversially, the two brothers insist that God actually “hates” racists, not merely their sinful racism. They quote Psalms 5:6 and state that racists are “bloody and deceitful men” who “God hates,” noting that “racists lie and claim that racial differences exist, they concoct false data in the name of science. Race doesn’t exist; it is a lie. Racists are also bloody murderers, who shed the blood of innocent urban African-American youths solely because of their skin color on a daily basis!” Brother Smith observed that “White hatred and persecution of African-Americans hasn’t changed in 400 years. In fact, it has gotten even worse if anything!”

Some practices at the monastery have received scorn and derision, even from opponents within the Church who deem them overly “extreme.” White male visitors have the words “privileged white male” stamped on their foreheads upon arrival. Both male and female whites are given thick knotted cords to flagellate their skin with. Advanced initiates are given leather belts instead. The most advanced initiates of all, sometimes choose to wear shackles or leg irons, as a symbol of the oppression and slavery that non-whites continue to suffer from, because white males have all the power in society.

An elderly nun at the monastery, Sister Sarah Francis, carved “I am white racist scum” into her own forehead with a knife just days ago. This gesture of piety and devotion to anti-racism inspired the entire monastery, the abbots noted. Quoting 1 Corinthians 4:10 Brother Smith told her “We are fools for Christ’s sake, but you are wise in Christ.” He observed that “to outsiders we are fools, fools who beat themselves, punishing our wicked white flesh. Yet, only in these acts can we find true peace. By scourging our evil white flesh we can touch God.”

At a special service before the morning and evening masses, each day, white guests, monks, and nuns enter the church and flagellate their flesh together, while chanting from a special liturgical work, which denounces whiteness, white privilege, male privilege, heterosexism, and economic inequality. The liturgy includes readings from the speeches of the Rev. Dr. Martin Luther King Jr., Nelson Mandela, Robert Mugabe, Mahatma Ghandi, and somewhat controversially, from Chairman Mao Tse-Tung’s “Little Red Book.”

Visitors are instructed to rise at dawn, to wash themselves thoroughly in ice cold water drawn from a local well and carried by hand to their rooms, then to dress in simple rags provided to them before arrival for the communal flagellation. Non-whites are invited to sit on gilded thrones lined with red velvet across from the flagellants. They are given suits or dresses of purple or gold to wear along with gold crowns. Above the gold thrones are written the words “Those who are first will be last, and the last will be first.” (Quoting from Matthew 20:16) After the service, whites gather to wash the feet of the non-whites in attendance. Many whites kiss the feet of the non-whites and tearfully ask forgiveness from them.

At the monastery, whites work in the kitchen, as they cook sumptuous four-course feasts for the largely African-American, Hispanic, and LGBT guests. White visitors eat gruel, or stale bread and water, consuming nothing else during their stay. So many non-whites are visiting the monastery, that they are now taking reservations for non-white guests in order to prevent over-crowding, to ensure that every guest has their own quarters, and that enough whites are on hand to serve them.

Calling the monastery “A model Catholic monastic community” Pope Francis praised the abbots for “Living the true spirit of the gospel of Jesus Christ.” During a visit to the monastery, Pope Francis donned the beggars rags provided to him, and began to ceremonially wash the feet of the non-white visitors. Kissing their feet lovingly afterwards, the pope thanked each one for giving him and the Catholic church the opportunity to serve them. “Remember it is easier for a camel to go through the eye of a needle than for a rich man to enter the kingdom of God.” The pope noted, quoting Matthew 19:24.

Only one week ago, a Palestinian Catholic member of the terrorist organization Hamas, which is now closely allied with the Islamic State and Al-Qaeda, insulted an elderly Jewish man by falsely accusing him of occupying a home that once belonged to his family. Francis apologized for the anti-Semitism that continues to plague his church, and stated that “Christ himself was Jewish, Christ is God, so anti-Semitism is anti-Christ and anti-God!” Measures are now being taken to excommunicate large numbers of the Palestinian Catholic community in the so-called “occupied territories” inside of the state of Israel.

Pope Francis noted that “There can be absolutely no excuse for Palestinian anti-Semitism.” The pope dismissed fabricated claims of massive land theft, murder, torture, racism, and illegal occupation for decades, made by so-called “Human-Rights” activists. Francis observed that “In reality they simply hate Jews because they are Jewish. The various explanations are a flimsy facade. I don’t want to hear Israelis did this or that. The truth is, no one ever hated Jews for their actions, only for being Jews! We must stop trying to rationalize Jew-hatred by seeking some sort of explanation for it. Jewish behaviour has nothing to do with the way people feel about Jews period, just as black behaviour has nothing to do with how people feel about blacks!”

Some white racists, who once visited the monastery have written dishonest hate-fuelled diatribes against it. One such woman claimed that black visitors tried to rape her, that they groped her against her will, and that the two abbots were indifferent to her claims, one even telling her to “get out, you racist cunt!” and calling her a “stuck up white whore” for not acceding to the sexual requests of black guests. The woman accuses Brother Smith of yelling at her “I bet you would blow him if he was white though! This is really about racism and your own white privilege! You sicken me!”

A controversial tract by Brother Berkowitz, available at the monastery, has received special condemnation from some racist extremists. The tract argues that the “Curse of Canaan” in the Bible refers to white skin. Calling whiteness “An ancient mark of God’s disapproval and scorn” Brother Berkowitz explains that God “cursed Canaan, the son of Ham. (Genesis 9:25) Who was destined to be servant of servants unto his brethren, Scripture states. Thus whites are called to serve non-whites forever, in this life and in God’s millennial kingdom, which we must build on earth ourselves. Once we create a society in which African-Americans come first, and whites last, Christ, who is also black, will return to earth to rule it as King.”

In an interview, earlier this week, Brother Berkowitz expressed his view that Jesus Christ was “Like a Falasha Jew, an Ethiopian black Jew. Few in the west even know there are black Jews!” And noted that Christ’s feet are like “Burned brass.” (Revelation 1:15) And Christ’s hair is like “wool” (Revelation 1:14.) More and more serious and thoughtful theologians are coming to accept the overwhelming evidence that Jesus Christ, the Messiah, Son of God, and the Third Person of the Holy Trinity, was and is Black! It will indeed be interesting to see if most Christian whites, confronted with the evidence of Christ’s black identity, renounce Christianity.