Church of England Declares The Prophet Muhammad A Saint

May 22, 2014 · by Diversity Chronicle · in Christians, Intolerance, Islamophobia, The War On Women

The Archbishop of Canterbury Justin Welby, principal leader of the Church of England, issued a statement Monday that was without precedent in Church history. The Archbishop announced that the Anglican Church’s general synod has voted to recognize the Prophet Muhammad as a saint. Saint Prophet Muhammad shall be honoured on his birthday, according to the Islamic calendar. Although this move is seen by many as an attempt at reconciliation with Islam, many Muslims are outraged. Some Muslims claim the Anglicans are attempting to marginalize the great Prophet Muhammad and distort his message.

Sadly efforts by the Church of England to be more inclusive have, inevitably, come under attack by those on the extreme and radical right. Some extremists and reactionary Christians claim that Muhammad is not and cannot be a Christian saint. Some claim that declaring the sainthood of Muhammad is even a form of apostasy or blasphemy.

The Anglican Archbishop, in a speech earlier today, observed that “Islam is the fastest growing religion in the world. Muhammad is now the most common name for new born male babies in England. If the Church of England hopes to remain relevant, we must find a way to reconcile our Anglican Christian beliefs with those of Islam. Great strides have already been made. We now have Sharia courts in the UK to assist Muslims, as advocated by my predecessor. In time, the Holy Qur’an ought to be placed alongside the Bible as a book of spiritual wisdom in our churches. We must make absolutely clear that Anglicanism in no way claims to be superior to Islam. We seek common ground with Islam, recognizing that Islam is the future of Britain.”

Unfortunately, some white supremacist hecklers attempted to disrupt the Archbishop’s speech. These individuals sought to rudely interrogate the Archbishop during the question and answer session. Putting these ignorant miscreants in their place, the Archbishop responded to them “English values do not derive from some sense of our own identity or our own history and culture. Rather our English values derive from our belief in the equality of all people regardless of race, religion, gender or sexual orientation! People who support racist and anti-immigrant views, have absolutely no place in our church! You racists can run out into the sea and drown yourselves, that would suit me just fine. Go on now, scuttle off!”

When asked what the Anglican Church is doing to help promote and safeguard diversity in the UK, the Archibishop happily responded. “Like all English government schools, all church functions which serve food, will serve only halal meat that has been slaughtered in accordance with Islamic law. Some Muslim leaders had requested that a barrier be installed in Anglican churches, to separate men and women during worship. Some churches have voted to install these gender segregation barriers. This issue has caused some controversy. Sadly, sometimes cultural values can be misunderstood. Some feminists in the church wrongly thought that the separation barrier served to somehow marginalize women or keep the sexes apart. As I understand it, the barrier is there solely to protect women from sexual harassment by men.”

Critics of the decision to make Muhammad an Anglican saint have been vocal. According to Sheikh Abdul Al Hussein-Qutbi, President of the Islamic Council For The Implementation of Sharia Law “This decision is an outrage and an attack upon Islam and all Muslims! The Prophet Muhammad was not a Christian saint; he was God’s final Prophet and Messenger to mankind! He had nothing to do whatsoever with the Church of England! Most of all, he had nothing to do with those dirty kafir pigs who say that homosexuality is equal with heterosexuality or that women are the same as men, or that all religions are true! This is a very grave insult and we will fight back! Our lawyers have filed a suit to seek a legal injunction prohibiting the Church of England from declaring the Prophet Muhammad a saint!”

A group of tens of thousands of Muslims have assembled outside of Canterbury Cathedral in protest of the recent decision. Holding signs reading “Freedom go to Hell!” and “Islam will dominate the world!” these peaceful and non-violent Muslim protestors are expressing outrage over what they regard as a major insult to their deeply cherished faith. Although some Islamophobic extremists claim that Islam is somehow anti-women, a woman protestor was seen among the crowd holding a sign, participating equally with the men! (The picture is shown at the end of this article, so as to debunk the hateful and untrue accusations of sexism against Islam.)

According to one protestor “When sharia law is declared throughout England, we will come for you first Justin Webly. The sword of Allah will pierce through your evil and blasphemous heart! We will cut your head off and use it to play croquet! We will drown England in rivers of blood!” Another protestor who wished to remain anonymous, and who held a small sign reading “Your daughters will belong to me!” stated that “I will personally slay any kafir dog, daring to call himself Muslim, who eats with, visits, or enters one of these churches of the Shaytan (Satan).” Several protestors held signs advocating the transformation of the UK into an Islamic state. Protestors loudly chanted “Islam will dominate the world! Sharia is the answer!”

At present, the Archbishop of Canterbury has been barricaded inside of the Cathedral and is unable to leave due to the large number of protestors surrounding the building. Police have urged the crowd to remain calm and to back away from the cathedral so as to allow people to enter and leave the building. Negotiations have taken place over the last ten hours, and authorities believe that a compromise with Islamic leaders is imminent. The compromise will allow relief workers to deliver food to the building. Let us hope that a compromise is soon reached, so that cordial and friendly relations between Muslims and the Church of England can once again resume their normal course. 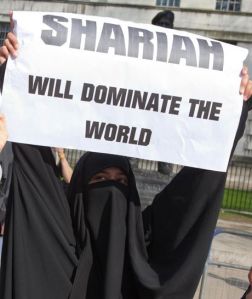