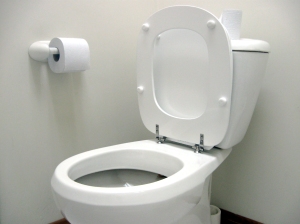 Male Chauvinists and anti-feminist activists have now taken the war on women to the next level, unleashing an indescribable reign of terror. Government offices, restaurants, libraries, public schools, parks and stores across the country report that males are entering restrooms and leaving the toilet seats up. Women’s rights activists believe that this is being done with malice and forethought as part of a deliberate plan to humiliate and frustrate women.

Diversity Chronicle’s own investigative reporters caught up with some traumatized women for their assessments of these troubling incidents. “I walked into the bathroom, but the toilet seat was up. I was scared. I didn’t know what to do. Should I tell someone and ask for help? I stood there in shock, motionless for several minutes, before deciding to leave to try the restroom across the street at McDonalds. Thank God, their toilet seat wasn’t up. I just don’t know what I might have done.” Kathleen Bullock stated describing her experience when she discovered the toilet seat was up in the only restroom at her local gas station.

“It is hard to describe the feelings that I felt at the time. I felt upset. I felt angry. I felt frustrated. Why was this happening to me? Why was the toilet seat up? How can men be so thoughtless and so selfish? I just don’t have words for what I felt. It just, made me feel very upset and powerless.” Susan Gomez told us. As sensitive and polite men around the world understand, leaving the toilet seat up after using the bathroom is simply unacceptable. More than an inconsiderate act, it is a supreme example of chauvinist conduct.

After receiving numerous complaints from women across the country, the government is finally beginning to respond. State officials in New York, Massachusetts and California have taken action. Mobile trailers filled with certified trauma counsellors will be travelling through major cities including New York City, Boston and San Francisco 24 hours around the clock for the next week to talk to local women who have been victims of the on-going toilet seat terror campaign.

“By talking to women who have encountered toilet seats that were left up in restrooms we hope to at least provide an outlet for them to express their feelings and obtain some measure of healing. I want women to know primarily that it is alright to own their feelings and they are entitled to them. Men often don’t understand. That’s why most of our trauma counsellors will be women. They can better relate to and empathize with the problems of other women.” Clinical Psychologist Dr. Diane Crane told us.

We asked Dr. Crane if there was anything that concerned men could do to help women or to offer support for them during this difficult time. “First men need to just listen. Let women express themselves and their feelings. Women need to talk about what is going on. They need men to listen and show that they understand and they support their partners, daughters and female friends during this difficult time. Women don’t want to hear about solutions to the problem. We just want to talk about it.” Dr. Crane responded. Our heartfelt thoughts are with suffering women across the country right now.