April 29, 2013 · by Diversity Chronicle · in Speciesism, The Right To Choose, The War On Women 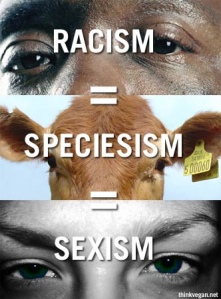 “Ants have rights too! Ants have lives and families too!” The speaker shouted through a megaphone to a group of about four dozen people. He was wearing a red Che style beret and a military uniform. The crowd represented people from all walks of life who travelled across the country to be here. They held up high their signs in defence of ant rights. Though considered a terrorist group by some, the Ant Liberation Army is dedicated to “protecting ants by any means necessary” according to its platform first penned in early 2002.

A woman describing herself proudly as a Pro-Ant feminist held up her sign reading “Ants are Matriarchal – They have Queens!” A young boy wore a t-shirt that he made himself reading “Ants have rights just like you” and an adorable little girl was held up by her two fathers holding a sign reading “If you were an ant, would you want people to step on you?” This much is clear, ant rights a new facet of the larger animal rights movement is gaining ground, and it is gaining new supporters of all ages, races and sexual orientations.

Miley Cyrus was spotted recently in Spain wearing a T-shirt reading “I love Ants – Fans don’t step on my small friends.” Madonna announced at a recent event that 40% of the proceeds from the sales of her music would now go to help protect endangered African red ants in the war torn region of south Rwanda. “In a war, the last ones you think about are the ants…” the singer observed, “someone has to do something and I guess it will have to be me” she added.

Here in Dallas Texas several construction trucks prepare to move down the road to break ground at the construction site for a new children’s hospital. The hospital will be offering free services to the needy including a large population of undocumented immigrant families. Unfortunately for them, the Ant Liberation Army has locked arms in front of the site. A showdown between ant rights activists and child welfare advocates in Dallas is taking place.

What is this all about, a Texas man in a large Stetson cowboy hat asked as several reporters begin taking photographs. “Ant Liberation”, a teenage girl wearing a red arm band with a black ant insignia on it shouted. It seems that the site of the proposed children’s hospital is unfortunately located on the habitat of the very rare Ghasoulacani sub species of red ants. As property has been rapidly bought up by developers in Dallas no other possible location could be found for the hospital.

Hospital developers and financers have offered repeatedly to negotiate with the Ant Liberation Army and have suggested that a way might be found to safely relocate most of the ants from their habitat. The Ant Liberation Army however, refuses to consider such a population transfer calling it genocide and vowing that even a single ant must not be sacrificed. It is believed that no less than four dozen of the rare ants make their home at the site.

The rare Ghasoulacani ants are a community of large red ants whose bites can sometimes be life threatening to humans, unfortunately according to medical authorities. Mort Stanton Commander of the Dallas chapter of the Ant Liberation Army disagrees “I am telling you these ants are peaceful. They sense that we are here to help them and they haven’t hurt anyone yet except for one young man, but he was running around quickly in their territory and they naturally felt threatened and responded. That was his fault and his mother understands that and signed a waiver of liability from our lawyers. Ants are very small creatures and their bite is really the only defensive weapon they have, so please don’t provoke the ants or they will retaliate.”

Down the street as fate would have it, a small group of extreme so-called “Pro-Life” anti abortion activists continued the war on women by protesting outside of a closed abortion clinic where it had recently allegedly been discovered doctors were delivering new born babies and leaving them to die slowly in a dumpster outside, sometimes first choking them to death with their own umbilical cords or beating their heads violently against clinic walls to kill them. Jars of severed fetal parts were found strewn about the blood soaked floors inside.

After serving the community for over twenty five years and in a major and tragic victory for misogynist women haters, authorities had recently closed the “Options and Choices for Women Clinic” after years of complaints and alleged rumours about unsanitary and dangerous conditions for women, as well as stories of young underage girls taken for involuntary abortions by parents, abusive boyfriends, as well as sex traffickers. A self-hating anti-abortion young woman outside held a sign reading “Every human life has value” featuring a picture of a bloody fetus terminated in a so-called partial birth abortion in which a woman bravely and heroically exercised her rights over her own body terminating the life of a fetus-parasite seconds before it otherwise would have become a person.

“Look at those fucking nuts” Some youths in the Ant Liberation Army commented noticing the small group of Anti-Abortion activists. “Fetuses are parasites not people” a teenage girl said smirking at them before adding “What have they got against women’s health!? I guess they all just hate women!” A young boy piped up “Maybe they are fags” as the group erupted in laughter. Asked for his opinion of the rival protest down the street, Commander Stanton replied “I am all about the ants, screw those damn religious nuts. Ants are in danger here! Let’s get back to the important business at hand, don’t waste my time with bullshit!”

Police cars arrived and several uniformed officers got out of their vehicles cautiously approaching the Ant Liberation Army, the officers have asked everyone to quietly disburse but the heroic ant rights activists remained undaunted. After a standoff for several hours, police finally rounded up and arrested the Ant Liberation Army. Camera men and independent film makers from around the world documented the event. The brave ant activists joined together in song as the police clapped handcuffs around their wrists and loaded them into a couple of paddy wagons.

Commander Stanton shouted as he was handcuffed and led off to a police van “We will not allow this children’s hospital, this hospital is built on the deaths of innocent ants! Let me go speciesist, fascist pigs! Let me go!” Commander Stanton’s cries were ignored as he was quickly dragged away by agents of a government for whom the lives and rights of innocent and largely defenceless ants are not even a distant priority.

In a major setback for animal rights activists the development of the St. Isabela Children’s Hospital moves forward. The hospital, which will provide free services to homeless and abandoned youth, undocumented immigrants, counselling services and free medical care to the homeless of the Dallas Fort Worth area is being built on a foundation of literal genocide against the rightful and indigenous inhabitants of this land, its ants.

An Ant activist with tears in her eyes cried out “We will never forget the ants, we will never forgive their killers!” A little blue eyed girl shouted “White people destroy everything! I hate them!” as social workers came to care for the distraught children whose parents have just been arrested by Dallas police. This is truly a tragic day. Will humans someday learn to value the lives of the smallest among us and arguably perhaps the most defenceless, the world’s ants?